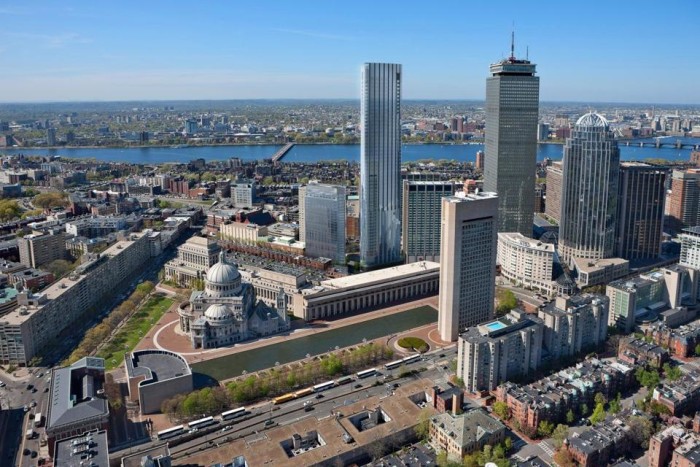 Construction has started on another new high-rise building in Boston. The Four Seasons Tower will be a mixed-use building with a hotel on the lower floors and luxury condos on the upper floors. At 700 feet tall, it will become the tallest residential building in the city and the third tallest building in Boston overall.

Located in Bostons Back Bay neighborhood, this triangular shaped high-rise will be the tallest building constructed in Boston since the 1970s. Its official address is One Dalton Street, right next to the Christian Science Plaza. At 60 stories high, the first 20 floors will be occupied by a Four Seasons Hotel. The current Four Seasons Hotel located near the Boston Common will remain open, making Boston one of the few cities to have two Four Seasons Hotels.

As part of the hotel, the lower floors will offer over 200 new luxury hotel rooms, two restaurants, two lounges and a spa. The remaining floors on the upper level will offer 180 new luxury condos and a private restaurant club on the 50th floor. The residential portion of the building will have its own separate entrance for people living in the condos.

According to Boston Magazine, the new luxury condos will have 11-foot ceilings and large bay windows as well as concierge and doorman services. At the base of the tower, a new public park will be created with landscaping to complement the surrounding area. In addition there will also be another 26-story apartment building constructed on the parcel right next to the tower.

Pricing for the condo units has not been announced yet. Construction on the development is set to be completed sometime in 2017.