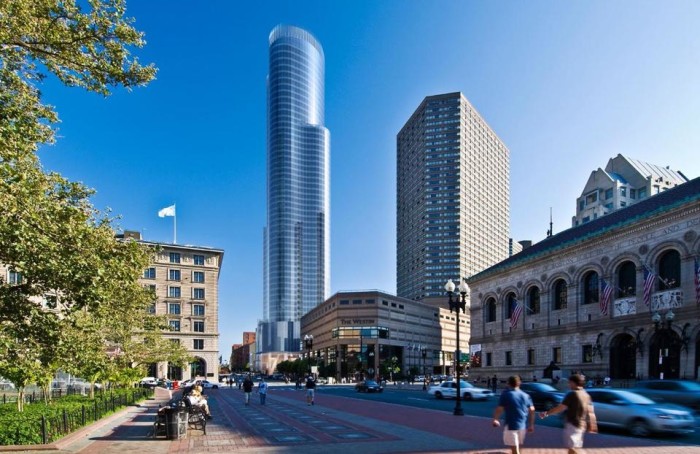 Construction has started on a major development project in the Back Bay neighborhood of Boston. Known as the Copley Place Tower, this 52-story high rise will alter Bostons skyline.

Development plans for this project have been in the works since before 2012. After years of community meetings and several changes, the Boston Redevelopment Authority finally granted approval. Located right near the Boston Public Library, this new building will tower over Copley Square.

The tower itself is only the most visible portion of a larger development, which will encompass a massive makeover of the Copley Mall. The base of the tower will be attached to the Mall and will create over 115,000 square-feet of additional retail space, as well as a new grand entrance.

The tower will hold a total of 542 new housing units. There will be 109 luxury condos for sale and 433 luxury apartments to rent. Of the 433 new apartments, 76 of them will be designated as affordable housing in concert with Boston regulations requiring a percentage of new housing to be reserved for middle-income people. Amenities will include; concierge service, underground parking, secure bike storage space and a 7th floor sky lobby and deck which will overlook the surrounding area.

Developers have touted this project as a win-win for all Boston residents. At over 500 feet tall, construction of the tower will create over 1,700 construction jobs as well as 250 permanent new jobs. The tower is also speculated to generate around $7.2 million is new tax revenue for Boston after its completion.