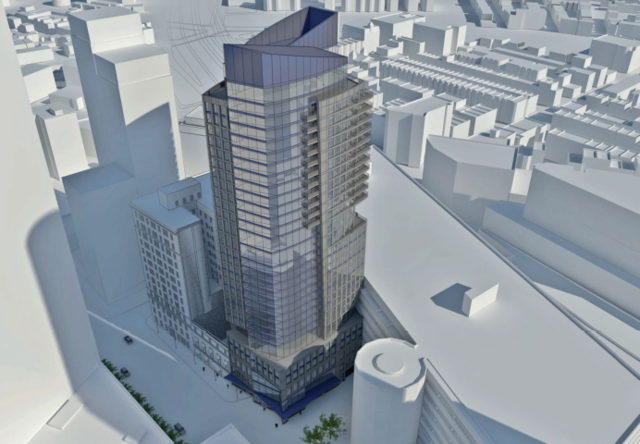 For the last few years, developers have been working with the city to construct a midsized high-rise building in Back Bay near Copley Square. After several delays, construction is finally scheduled to start on 40 Trinity Place in 2017.

40 Trinity Place will be a 31-story building with a four-star hotel on the lower floors and luxury condo units on the upper floors. The building will be replacing the 11-story Boston Common Hotel and Conference Center, which is adjacent to the Hancock Tower. The Hotel will have over 150 rooms while the upper floors will consist of 146 luxury condo units. Amenities for those who live in the future units are said to include concierge service, valet parking, a movie theater and a spa.

The look of the building has been designed to minimize visual impact on the Boston skyline. Many architects have praised the buildings sculpture-like design. According to the architectural team that designed the building, it was explicitly designed to distinguish itself from adjacent buildings nearby. They also pointed out that shadow and wind impacts on the surrounding area were carefully considered.

The highlight of the building will be a two-story sky lobby and bar, which will be set on the 15th floor. Developers are planning on having a celebrity chef operate the restaurant and people from all over Boston will be able to come and view the city below from 150 feet in the sky. The restaurant will also feature an outdoor patio, which when completed, will become the highest rooftop bar in the city.

The ground floor of the building will open up retail space allowing for more business in the neighborhood.