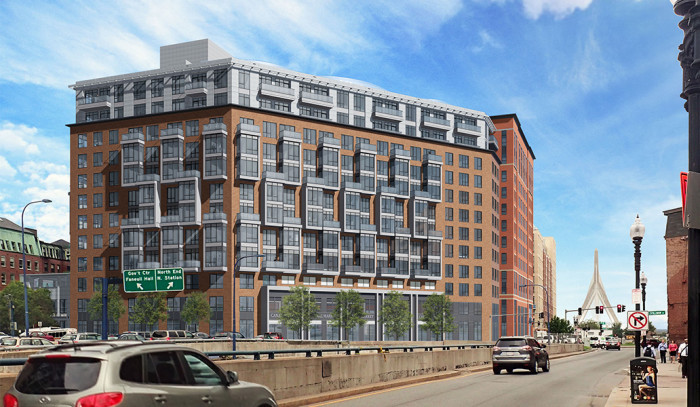 When the Big Dig was finished, most of the land covered by the massive raised highway was converted into a linear park winding through the city, now known as the Greenway. The few spots of freed up land not included in the new park was broken into parcels and sold to private developers. The largest chunk of these parcels make up an area known as the Bulfinch Triangle.

Located between the West End and the North End, the Bulfinch Triangle has been an awkward undeveloped site between two of Bostons busiest neighborhoods. Two of the parcels were small grassy areas that were un-kept while the third served as a small parking lot. With the explosion of a building boom in Boston, developers have proposed plans for all three parcels.

The first of the three parcels was recently developed into a massive new apartment building called The Victor. This building is anchored by a popular bar and restaurant, Tavern in the Square. Now the second of the three parcels, a triangular shaped plot of land next to The Victor, is being developed into a new apartment building that will be called One Canal.

One Canal has been approved by the Boston Redevelopment Authority and is already under construction. When completed it will be 12 stories high and hold over 320 units. Around 20 of the units will be reserved for Boston residents who are classified as middle income, while the rest of the apartments will be luxury units set at market price.

One Canal will feature some of the best views in the City with units looking over the North End, the Greenway and the Zakim Bridge. The most coveted feature of the property will be a massive roof deck complete with a pool, sitting area and a fire place. This roof deck will have 360-degree views of the entire city so that residents can watch the skyline of Boston as they swim in the rooftop pool.