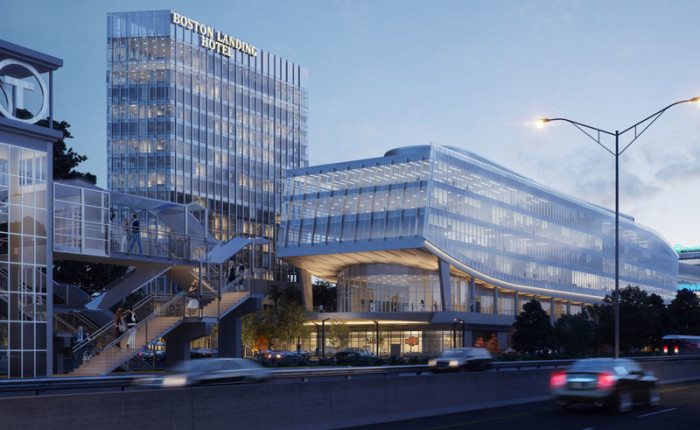 Anyone driving into Boston from the South will have noticed the major construction along the highway outside the city that has been going on for over a year. Since its approval in 2013, a major develop in Bostons Brighton neighborhood has been underway.

Boston Landing is a massive development along the Massachusetts Turnpike spanning over 15 acres. Located in Brighton, it stands out as a recent major development project that is not located Downtown or in the Seaport District. The project will bring several modern office buildings, restaurants, shops, a new commuter rail station, a park and an ice rink that will serve as the official new practice facility for the Boston Bruins.

At the heart of the development will be a massive 250,000 square foot complex which will serve as the new world headquarters for New Balance. The buildings unique architecture and futuristic look has already garnered attention from architects and local residents. The building will be part of over 650,000 square feet of new office space that will be created as part of the development.

While the office space will give room to Bostons expanding economy, residents are most excited about the new park and shopping district that will make this development a destination for locals who may not want to spend the time and high cost to travel into Downtown Boston. There will be up to 80,000 square feet of restaurant and retail space along with a 175 room boutique hotel.

The ice rink will be a state of the art training and practice facility that will be named the Warrior Ice Arena. As the new practice facility for the Bruins, the arena will be open to the public and offer programs for youth and local residents.