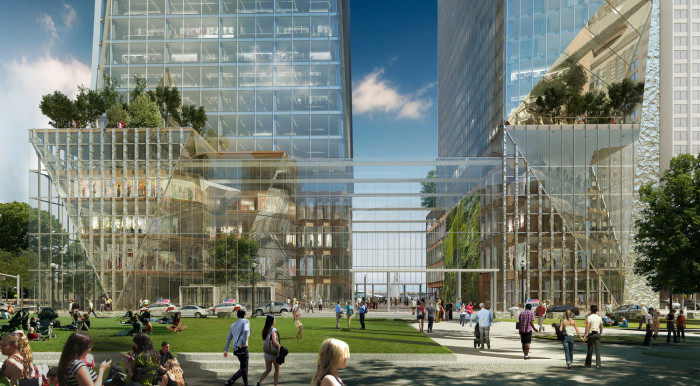 Recently another proposal was made for the redevelopment of the Harbor Garage. Located on waterfront property between the Greenway and the harbor, this property has been the source of much debate in recent years.

The garage sits right next to the New England Aquarium, making it prime real estate. It was purchased by a well-known developer, named Don Chiofaro, who first came up with a proposal in 2009. His original plan called for the garage to be replaced with two high-rise towers that would be connected with a giant modern arch. The massive size of the development combined with the strange look of the buildings drew massive public outcries. Residents of the neighboring Harbor Towers residential complex are opposed to any high-rise building that would threaten some of their views. Many of them spoke out against the development while other Bostonians described the buildings as unsightly and too big.

The controversy stirred up by the plans eventually led to a public feud between Mayor Menino and Don Chiofaro. It was no secret that the late Boston Mayor along with his administration were closely connected with the BRA. Due to the massive public opposition, the project was shelved.

Now Boston has a new mayor and Chiofaro is looking for a clean slate. He has come forward with a completely new development proposal designed to attract broader public support. The plan consists of two high-rise buildings that still retain the modern edge envisioned by Chiofaro but are much more aesthetically pleasing than the buildings in the previous plan.

The lower floors will be graced with a giant public space that will be used to connect the Greenway with the harbor. Made up entirely of glass, this space will have a retractable roof, which will make it useful for any season. While there is still some push back concerning the height of the towers, this proposal has received much more support than the first. 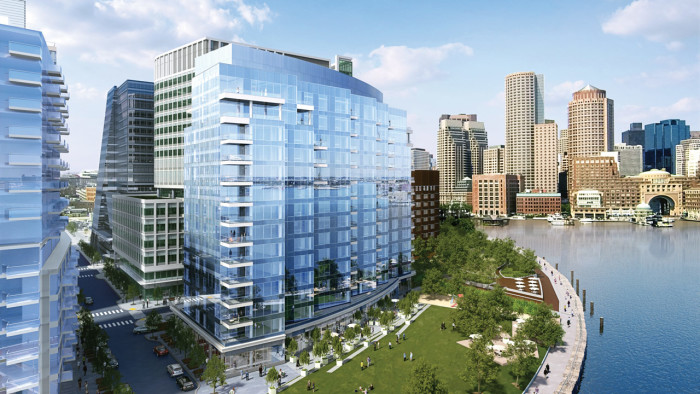 Described as one of the most significant and coveted waterfront sites on the East Coast, Bostons Fan Pier has been a driving force behind the massive change that has swept through the Seaport District.

No area of Boston has been more affected by the citys recent building boom than the Seaport District. Once a huge swath of land, filled with loading docks and parking lots, many local Bostonians once considered this neighborhood to be an industrial wasteland. That all changed in 1998 with the construction of the Moakley Courthouse. Since then, the Seaport District has been transformed into one of Bostons biggest up-and-coming hot spots. Home to Bostons World Trade Center and the new Convention Center, the district features wide pedestrian-friendly sidewalks, new parks and a harbor walk. New buildings are springing up in the Seaport District more than in any other part of the city. These new buildings are home to hotels, luxury apartments and five-star restaurants.

The Fan Pier is a multi-million dollar development in the heart of it all, featuring restaurants, shops and office space with views of Boston Harbor. The 21-acre project spans nine blocks of the Seaport District. Built on old parking lots, the modern buildings are surrounded by beautiful landscaping and well-lit walkways. There is also a new cove marina equipped with docks to accommodate boat owners.

With most of the development finished, the final two buildings are currently under construction. Named Twenty Two Liberty, these two 14-story residential buildings will be made entirely out of glass and consist of luxury condos. Built on the waterfront, the condo units will feature floor-to-ceiling windows and private decks overlooking the harbor.

The complex will offer studios and 1-3 bedroom condos. The price range per unit is said to be between $900,000 to $4 million.