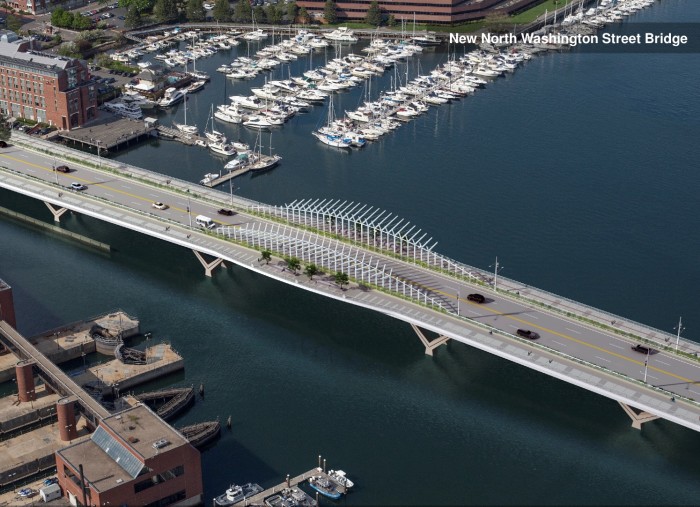 Officially named the North Washington Street Bridge, it is known by most Bostonians as the Charlestown Bridge. Made popular for its role during a car chase in The Town, the bridge has connected Charlestown with the rest of Boston since it was built in 1900.

In November, the Boston Public Works announced plans to reconstruct the bridge with a completely new modern design. Now over 100 years old, the current bridge is crumbling and is in a state of disrepair. The middle traffic lane has been closed due to structural issues and the rusting iron covering the central span of the bridge has created an eyesore for residents. The narrow pedestrian sidewalks were not designed to withstand the foot-traffic of the Freedom Trail and the unsightly bridge has become an obstacle, deterring many tourists from pursuing the Freedom Trail into Charlestown.

The new bridge seeks to solve these issues and will completely transform the connection between Charlestown and the rest of Boston. The new design is based slightly off the design of the popular Zakim Bridge, which runs parallel to the Charlestown Bridge. Therefore, the look of the two bridges will complement each other and will be aesthetically pleasing to residents and visitors.

Aside from visual appeal, the new bridge will be designed to accommodate the needs of a growing and diverse city. The bridge will be expanded so there will be two lanes of traffic going in both directions. Plant beds will adorn both sides of the main road, separating it from the expanded pedestrian walkways. According to the renderings, the walkways will be complete with benches to sit on and trees going across both sides of the bridge. Also, there will be set bike lanes in both directions to ensure safety.

With a $100 million estimated price tag, the new bridge will set the standard for modern bridge design. Construction is scheduled to start around 2017 and should be completed by 2020. 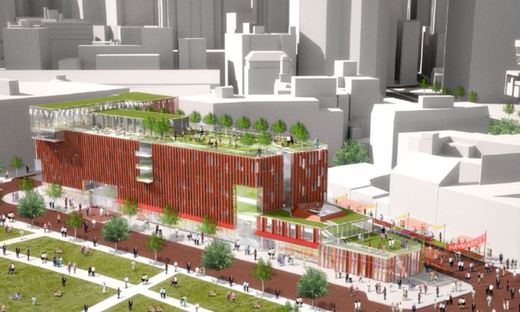 When the Big Dig project moved the central artery running through Boston underground and created the Greenway, several parcels of land were set aside for development. One of the most coveted of these has been parcel 9, a triangular shaped plot near Faneuil Hall, currently making up a significant part of Haymarket Square.

With its ideal central location, Haymarket Square has been home to one of Bostons major farmers markets since the 1830s. Today, residents of the North End, West End, and other parts of central Boston flock to Haymarket for fresh fruits and vegetables every week.

Last year, a competition was held with several different proposals made to determine the future of parcel 9. The victory design chosen was a hotel proposed by Normandy Real Estate Partners and Jones Lang LaSalle. The original plans consisted of an 8-story hotel with 180 rooms and a first-floor market hall, which would have retail space and a restaurant. The modern design would have a unique look and would include a rooftop garden.

After winning the competition, plans were changed to a 10-story hotel with 225 rooms. To compensate, developers added a two-story market hall. While many residents are excited for the development, there has been some pushback. Some feel that the hotel is too tall for the area. Parcel 9 runs parallel with Blackstone Street, a road lined with some of Bostons oldest buildings and a protected historical district.

Currently, the farmers market based there uses an assortment of stands, tents and tarps, creating a maze for pedestrians to navigate through. Local residents also point out the weekly mess left over from the market due to the lack of waste facilities. The new development would solve this by providing permanent storage space for the farmers, appropriate waste facilities, public restrooms and matching covered food stands which wood give the market a more organized look and a cleaner feel.

Once the details of the hotel can be hashed through, the developmentshould transform the farmers market and have a positive effect on the entire area. 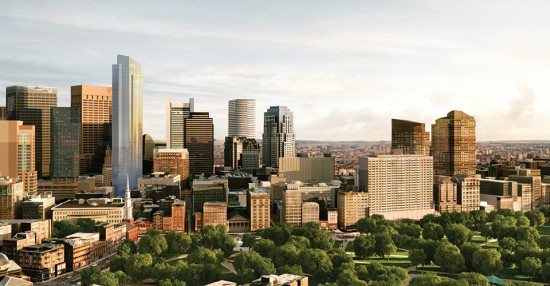 One of the most anticipated high-rise buildings coming to central Boston is the Millennium Tower. This development was one of the first major projects to get approval in Bostons recent building boom.

Located in Downtown Crossing, this area of Boston has been an up-and-coming hotspot in recent years. In 2005, Emerson College purchased the aging Paramount Theater and completely refurbished it. In 2010, Suffolk University followed suit with the historic Modern Theater. Both developments have been credited with breathing new life into Downtown Crossing. Now, the Millennium Tower is set to become the crown jewel of the neighborhood when it is completed in 2016. The project is currently under construction on the site of the old Filenes building, which had been knocked down in 2008 for another development. That development had been stalled due to the economic crisis and left a giant hole lingering in the middle of the neighborhood. With approval of the Millennium Tower in 2012, the unsightly hole will be filled in with one of Bostons greatest architectural marvels.

At 685 feet, the Millennium Tower will be the tallest residential building in Boston and the third tallest building in the city overall. According to the Boston Business Journal, the development will cost over $680 million to build and will create over 1.2 million square-feet of commercial and residential space.

The tower will hold over 400 luxury residential units ranging from 759 to 12,846 square feet. Residential units will start around $850,000 and the top floor will be graced with a $37.5 million penthouse. At 60 stories high, the penthouse will take up the entire top floor of the tower and is rumored to have a 2,500 square foot roof deck.

The lower floors will consists of retail and office space, along with a restaurant, a health club and a spa. 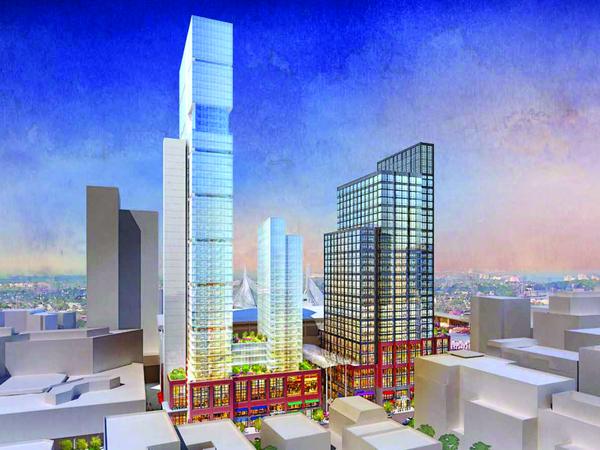 As one of the last acts during the Menino administration, the Boston Redevelopment Authority approved a massive development project on the doorstep of the TD Garden sports arena. As Bostons longest serving Mayor, Menino played an active role in the BRA and worked hard to advocate for projects that he personally approved. This development was one of the last major projects that his administration had been working to get approval for.

The development is expected to cost up to 1 billion dollars and consists of three high-rise buildings that will transform the skyline of Bostons West End neighborhood. The tallest building will be 600 feet, which will make it the tallest building in central Boston. According to the Boston Business Journal, the development will create over 1.7 million square feet, which will include a 20-story hotel, a 25-story office tower and the 600-foot residential building equipped with 500 units and up to 376,000 square feet of retail space.

The centerpiece of the project will be a covered boulevard for pedestrians that will serve as the main entrance to the sports arena. This entrance will be adorned with restaurants and shops and will serve as a shrine, highlighting the success and accomplishments of the Boston Celtics and the Bruins.

Currently, the area in front of the TD Garden where the project is to be built, is a fenced parking lot that separates the Garden from the sports bars and restaurants on surrounding streets. Also, the current main entrance to the Garden is located around the side of the complex and has been criticized by some as too boring for a building that has otherwise been praised for its architectural design. The new development will transform the area around the Garden and will help better integrate the sports arena into the neighborhood.