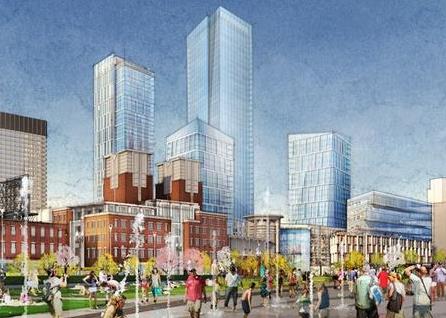 After years of planning and months of debate, the Boston Redevelopment Authority has approved the redevelopment of the Government Center Parking Garage.

Built during the 1960s as part of the original Government Center Redevelopment project, the garage was designed in the brutalist architecture style matching the City Hall as well as several other prominent buildings around Boston at the time. The garage has been criticized by many as a giant eyesore and has been dubbed by many locals as the Berlin Wall of the West End. Due to its central location and massive size, the current garage straddles Congress Street, creating a dimly lit underpass connecting the popular Faneuil Hall area with the West End neighborhood.

Now a developer has stepped forward with a massive plan to tear down the existing garage and replace it with a sweeping new development. The project will replace the garage with six new buildings including two high-rises. The centerpiece of the development will be a 528-foot office tower along with a 480-foot residence tower that will transform the skyline of central Boston. According to the Boston Globe, the development will create 812 new residences, 1.1 million square foot of office space, 196 hotel rooms, and several new stores and restaurants.

Most importantly, part of Congress Street currently passing under the garage will be liberated once the garaged has been torn down. Many residents and business owners feel that this will breath new life into the West End and re-connect the TD Garden sports bar district with the rest of the Faneuil Hall area. Currently, the garage completely blocks any view of the TD Garden from pedestrians in Faneuil Hall or Government Center. Opening the area above Congress Street will allow the lights of Bostons major sports arena to be seen by people in both of Bostons two most popular locations in central Boston.