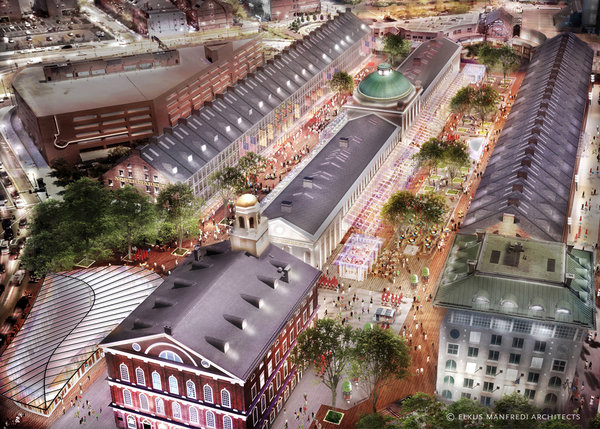 Residing in the very heart of Boston, Faneuil Hall Marketplace has served as the central tourist destination of the city since its first major renovation in the 1970s. With an estimated 20 million visitors a year, it is one of the most visited sites in the United States. Many Bostonians view Faneuil Hall Marketplace in the way that New Yorkers view Times Square. Now a proposal has been made to renovate Faneuil Hall and bring it into more modern times.

Not much has changed in the Faneuil Hall area since the 1970s. From its iconic bubble lights to the cobblestone walkways, many people have been waiting for Faneuil Hall to catch up with the rest of the city that has grown around it. The goal of the redevelopment is to make the marketplace appeal more to locals and not just tourists. Many Bostonians have learned to avoid Faneuil Hall, especially on the weekends. The hope is that the new developments will draw back in many of the locals and make the area feel less like a tourist destination

Proposed renovations would include replacing the crumbling cobblestone and brick walkways with a new flat stone walkway and replacing all of the dark windows in the buildings with modern clear glass that would help conserve energy. The major renovation would be on the central food court located in the central Quincy Market building. It is currently home to around 70 very crowded small vendors adorning a narrow path. The new renovation would upgrade the food court with larger sit-down restaurants and bars. Other renovations would include building a 180 room hotel in the South Market building, replanting new trees and replacing the outdated glass building with a new modern class structure more capable of sustaining diverse businesses.

Because the Faneuil Hall Marketplace is designated as a Historic site, approval for the project will have to go through both the BRA and the citys Landmarks Commission.